“The Skipper” and a man’s dream to fly.

My adventures started just over a year ago when a friend of mine was losing a partner in
a Piper Arrow.  The group of four didn’t want to go to three for cost reasons, so they
were looking for someone interested.  One of the partners is a CFII and agreed to
instruct me at a very reasonable price. Additionally, the group gave me a very attractive
“rental” rate to learn in with the intent that I would buy in after I received my ticket.
Getting the ticket went very well.  It did take me about 60 hours and I think that was
in part because I started in a complex aircraft instead of a nice slow 152.   I received
my private pilot’s license in November of 2009.  I immediately began working on my
instrument rating.  I took ground school at the local FBO and passed the written with
flying colors – and even went on pass my instrument ground as well.

Well, some things don’t always work out for the best and needless to say, I ended up
walking from the group.  I had received over 40 hours of dual inst. training and was very
close to my check ride.  I dread learning it ‘over’ again as I was so comfortable with the
panel (Garmin 430w), the plane, the autopilot, etc…   Also, since I was given such a
great deal, I know I would not be able to afford the rack rates for a rental IFR plane
and instructor (I was paying $15/hour for instruction and $20/hour for the airplane +
fuel). 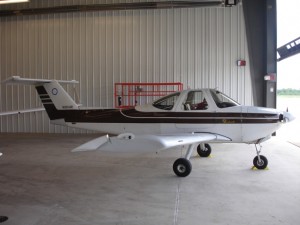 Out of frustration and the want to simply be
in the air, I stumbled on this Beech Skipper
that was for sale locally.   The owner had recent
receipts for over $20K invested in the
airplane during the past 1.5 years including
mags, instruments overhauled, new Airtex
leather seating, new carpet, new seatbelts, all new windows around, new JPI engine
monitoring w/ fuel flow, new Garmin 496 w/ XM, headsets, new wingtips, new tail cone, etc. The engine had only 450 hours time since major overhaul. He needed to dump it and was willing to take $17,000 for everything. I jumped on it and have been flying it all summer.   It only burns 6 GPH and is very fun to fly.   Sure miss the Arrow for actual trips, but nothing like the Skipper for taking a friend up for local sight seeing.
And at that price, can’t hurt me too much!  Only cruises around 100 Knts unless you have good wind at the rear, but the visibility is great.

I still am really bummed about not getting to finish the instructing before the bomb
exploded at the club, so I will have to devise a plane in the future.  I think I can
still get the instructor cheap, but that isn’t what I need at this point.  I just need
lots of practice getting on with the controllers and flying approaches.   I have
considered trying to borrow the money to get the Skipper certified, but think it will
probably be too costly 🙁 .   That way I could do a ton of practice at a cheap rate.

I currently put the Skipper on leaseback at Solo to see if that could cover some
expenses.

Oh, the other reason I got the Skipper because my 14 year old wants to learn soon.  He
has already taken some lessons and really enjoys it.  His goal is to solo on his 16th
birthday.

Here is a video of him taking off in the Skipper:

http://www.youtube.com/watch?v=OfDgej5W4Xg
I sure do enjoy the flying!!!

A special thanks to Andy for sharing your passion of flying and the story of “The Skipper”.