WOW! What a day it was at the Porsche Aircraft Experience this year at Peachtree Dekalb Airport (KPDK) in Atlanta, GA. I was there with the Super Hawk as a static display. 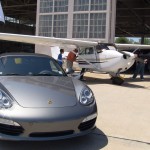 Sean Hachem with Hawk Avionic and Mo Holcombe with Discovery Flying Club was also on hand as many interested spectators poked their heads in the door to view all the Super Hawk had to offer.

This year the Super Hawk sported it’s new Garmin GTN650. I am truly amazed at what Garmin has done with this new unit. With little pre-training I was able to pick right up on and use the GTN 650 like it had always been there.

For more information on the Super Hawk or any of it’s equipment feel free to contact me at tommy@priavtepilotinsider.com.

Also on hand was some of the coolest jets around. Some of them included Cessna with the Mustang, CJ3, the 400 and Sky Catcher. I was also able to tour and just for a moment sit left seat of a Gulf Stream G3.

Some of the other aircraft’s represented included Pilatus PC-12, King Air and Daher-Socata.

I  must say however I was most impressed with the Total Eclipse Jet. I had the opportunity to talk with Rich Hayes the business development officer for the Atlanta, GA division of North American Jet Charter about the Total Eclipse.

With a 41,000′ ceiling and a range of over 1100 miles this single pilot jet proves to be both luxurious and efficient.

Rich Hayes and North American Jet Charter are currently operating in several location across the USA and in the process of opening a new division at my home airport, Cobb county Georgia’s own McCollum field KRYY.

Of course I can’t forget the 4 wheel beauties that was present as well. Unfortunately I was unable take the time to drive any of the Porsche’s that was on hand but I did sneak the opportunity to see how a few of them fit me. 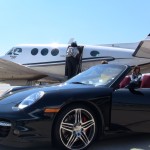 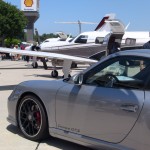 It sure was hard to keep my focus on the task at hand with so much style, power and craftsmanship. Sitting in the seat of the Boxster S I could just feel all it had to offer without even moving. From the way the seat wrapped around me to the details of it’s instrument panel it’s not hard to see all the perfection these cars had to offer.

As I departed KPDK that day avoiding the wake turbulence of a G5 departing on a parallel runway I had to say it was a great day. The event was organized very well. As nice as the cars was I still lean toward the air. The left seat of the Boxster S compared to the left seat of the Gulf Stream G3………I’ll take the G3. No brainer , huh!